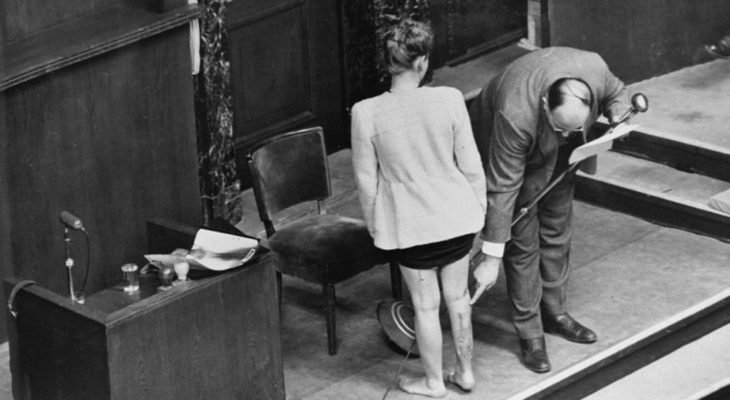 It has now been seventy years since a United States military tribunal tried twenty-three people in Nuremberg, including twenty doctors and medical researchers,1 for war crimes and crimes against humanity. They were accused of having constituted a collection of skeletons, implementing the T4 euthanasia program and having carried out medical experiments2 on prisoners in the concentration camps at Auschwitz, Buchenwald, Dachau, Natzweiler, Ravensbrück and Sachsenhausen between September 1939 and April 1945 – the period over which the tribunal had jurisdiction. Of the twenty-three defendants, seven were acquitted, seven sentenced to death3 and the others given prison sentences of at least ten years.4

This trial (Karl Brandt and others)5 was set up by the authority responsible for the American Zone of Occupation, the Office of Military Government, United States (OMGUS), which in October 1946 created the United States Military Tribunal.6 It was the first of the trials carried out under article 6 of the London Agreement of 8 August 19457 and Law no. 10 issued by the Allied Control Council on 20 December 1945.8 The trial began on 9 December 1946, coming to an end less than a year later, with pronouncement of the verdicts and sentences respectively on 19 and 20 August 1947.

Two years after the end of this trial, twelve former members of the Japanese armed forces, including six members of Unit 7319 and two members of Unit 100,10 were tried in the USSR. This one is far less well-known than its American counterpart,11 taking place from 25-30 December 1949 in the city of Khabarovsk.12 According to the indictment of 16 December 1949 drawn up by Prosecutor Berezovsky,13 the defendants were accused of having tested biological weapons on Russian and Chinese prisoners. The indictment thus mentions biological weapons tests which aimed at spreading different diseases and bacteriological agents such as typhoid fever, the plague, cholera or tuberculosis.14 It also mentions experiments conducted on women to test ways of treating syphilis as well as experimental treatment for limbs, which incurred their previous freezing. One defendant, Kawashima Kiyochi, stated during the trial that at least 600 people died every year due to the experiments carried out within Unit 731.15 According to Matsumura Tomokatsu’s testimony, these experiments on humans were given the green light by the Commander-in-Chief Kenkichi Ueda, and by his successor Yoshijirō Umezu.16 All the defendants pleaded guilty and were given sentences ranging from 3 to 25 years in a labour camp.

Conversely, the Nuremberg defendants did not plead guilty, and this is in large part due to the defense’s argument, which sought to draw a parallel between the experiments carried out in Nazi Germany, and those which were being performed everywhere else in the world, particularly in the United States.17 It should not be forgotten that even as the Nuremberg trial was going on, American researchers continued infecting African-Americans in Tuskegee with syphilis,18 and more than 1300 Guatemalan prisoners – without their consent – with the same disease in addition to gonorrhoea and chancroid to subsequently study how they progressed, with or without treatment.19

The Nuremberg Doctors’ Trial is thus located at a crossroads where three types of issues intersect: military ones, scientific ones and ideological ones. Military ones because this trial was related to all of the other trials aimed at prosecuting war crimes and crimes against humanity committed by the Nazi state during the Second World War. Scientific ones because the trial was specifically aimed at acts carried out during this period by German researchers and doctors on people who were treated as mere guinea pigs. And lastly ideological ones because the courtroom was the theatre of a confrontation between two conflicting visions: on the one hand, a relativistic and totalitarian vision which asserted the supremacy of the social body over the individual20 and on the other a universalist and liberal vision which contended that it was the individual who had precedence over society.21

In his opening statement, Prosecutor Telford Taylor appeared to mainly focus on the latter issues to pinpoint the reasons and the motives which led to the dehumanization of the victims.22 He thus pointed to the “prostitution”23 of doctors and medical science to Nazi ideology. However, whereas for him the crime was almost biomedical,24 “committed in the name of medical science”25 yet without being scientific,26 the developments of the trial would lead the court to take a different stance. Thinking in terms of the three types of issues listed above – military, scientific and ideological – the judges would define rules for a system of protection of bodily integrity for people regarding experiments on human beings. Moving away from a dichotomous stance delineating true science/false science, they were able to outline ten ethical and legal principles to regulate all clinical experiments,27 which were subsequently known as the “Nuremberg Code”.

Where most legal commentaries thus focus on the mere reading of these ten principles, some authors even writing on the “lost truth of the Nuremberg Code”,28 I would like to highlight some of the steps in the legal journey of the American judges. Starting from the Martens Clause, they tried to find their path through international medical ethics. Unfortunately, they failed to address one of the most difficult issues in clinical trials and human experimentation: the almost unavoidable context of exploitation of any situation where a person is used as an object for the good of others.